Amazon to Launch Drone Delivery … The Jetsons or Surveillance Dystopia?

Amazon.com has announced it wants to use drones to deliver your packages in 30 minutes. Is the widespread use of drones flying around everywhere more than likely with two way video and audio technologies good or bad for us and our privacy?

Could a dictator come to power and rule a nation or the entire world with an iron fist,  controlling all who buy and sell. WILL THESE TYPES OF DRONES ALLOW HIM TO DO THIS MORE EASILY?

These drones will know your name, address and what you buy from a central database to deliver to you what you order. Will they talk, listen, video you? Will they have the capacity to spy on you at your front door?

Amazon said: "One day, Prime Air vehicles will be as normal as seeing mail trucks on the road today."

If this is true of Amazon vehicles being as normal and frequent as mail or delivery trucks, then this will also be true of many other companies and government  agencies. Will this be like the Jetsons and be no big deal or will it make life a surveillance and control dystopia by giving the a dictator the tools to control us through surveillance and commerce.

STORY AND  VIDEO BELOW 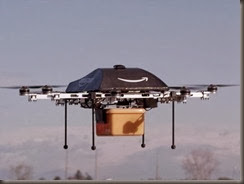 Amazon.com is testing delivering packages using drones, CEO Jeff Bezos said on the CBS TV news show 60 Minutes Sunday.
The idea would be to deliver packages as quickly as possible using the small, unmanned aircraft, through a service the company is calling Prime Air, the CEO said.

Bezos played a demo video on 60 Minutes that showed how the aircraft, also known as octocopters, will pick up packages in small yellow buckets at Amazon's fulfillment centers and fly through the air to deliver items to customers after they hit the buy button online at Amazon.com.

The goal of the new delivery system is to get packages into customers' hands in 30 minutes or less, the world's largest Internet retailer said. Putting Prime Air into commercial use will take "some number of years" as Amazon develops the technology further and waits for the Federal Aviation Administration to come up with rules and regulations, the company added.

Bezos told 60 Minutes that the service could be up and running in as few as four years — although he noted that he is an optimist when it comes to such things.

"One day, Prime Air vehicles will be as normal as seeing mail trucks on the road today," the company said.
This is the latest futuristic effort by Bezos, who was an e-commerce pioneer in the 1990s and more recently popularized the e-reader — while pursuing personal projects such as private spaceflight and a 10,000-year clock built inside a mountain. 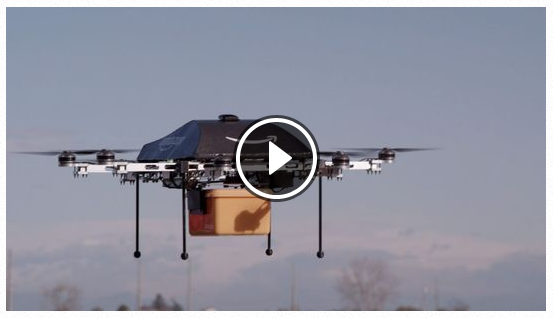