Home » »Unlabelled » Cantor's Loss Should Have Surprised No One

Cantor's Loss Should Have Surprised No One

by Baird Stokes     * Most, though not all, views in this article are shared by this website 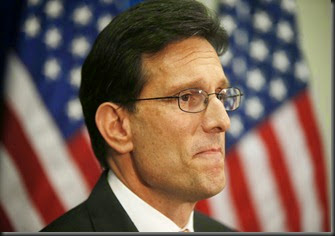 Reportedly, some Democrat heavyweights warned Cantor, but his staff refused their help, even not returning phone calls. Cantor paid a Democrat pollster $75,000 to tell him he was up +34 points two weeks before November 11th. They went to sleep. Cantor was in DC raising money on election night!

Anyone who refuses to answer constituent questions in front of the assembled Goochland Republican Woman's Club (for example) last month, and then claims, looking at his watch, he cannot take additional questions, because he has to leave "due to a scheduling conflict" is TOAST in Goochland County.

Then, Cantor sneaks behind the backs of his constituents and tries to craft a bill to legalize 11+ million illegals, when working people are trying to make ends meet. Most of our young people who are college graduates are working as waitresses and coffee baristas. This is not like Northern Virginia, where government bureaucrats are secure in their jobs and making much more than ordinary folk. People realize that the notion that we can outbid the Democrats in pandering to Hispanics is fictional nonsense. Reagan's folly in 1986 should have taught us this.

As the illegal children pour into Texas and Arizona on national TV by Democrat design (all future Democrats.), the hole was dug deeper. The establishment says "the border is secure and under control." Do you believe them, or do you believe your lying eyes? The Department of Homeland Security has refused to let the Border Patrol talk (some do anyway), or have the press interview the children, or their families. We are talking teenagers having unsupervised sex in warehouses on military bases, with rampant sexually transmitted diseases, TB, scabies, measles, etc. Ask ranchers who live in Arizona five miles from the Mexican border, if "the border is secure."

People here who have struggled to put their kids through college on a working man's salary resent giving in-state tuition to illegals. They resent calling on the phone and being told "Si necesitita Espanol, mache dos..." They resent being labeled a "racist" because they feel this way.

The media keeps referring to Brat as "a Tea Party candidate." The Tea Party did not give him a dime. He campaigned with two staffers (college kids probably), his cell phone, about $100,000, and a door- to- door effort/speaking to small groups. He had a 20 minute reasoned articulate stump speech, focused on five basic Republican principles.

The characterization that he is a "far right Tea Party kook" is nuts. Brat refuses to let the Democrats do to him what they did to Romney. In other words, he is a counter-puncher. He professes his Christian faith (Princeton Theological Seminary), but not in a threatening way. He is a school-trained PhD economist, who believes in the 10th Amendment, property rights, equal justice under the law, a smaller/less intrusive Constitution-limited federal government that lives within its means as founded, and free markets. Brat was outspent 25 to 1, but he was all over the Commonwealth's 7th District with a consistent message that resonated.

Cantor had money, power, and name ID, but he got killed on immigration, and the perception that he was in the pocket of the Chamber of Commerce and big business. Small businesses here are groaning under the weight of taxes and regulation, with more to come. Some have closed up shop, after years of success. As Brat said, "Dollars don't vote!"

The progressive pundits, even a few conservatives who should know better like George Will, try to argue that immigration was no big deal because of a poll that says 72% of the 7th District wanted immigration reform. Look behind the poll-what does immigration reform mean? To Goochlanders, it means secure the borders a la the Israelis, and don't talk to me about anything else until that has been done. Then, enforce the law against companies that hire illegals. Finally, we can discuss how to give illegals some kind of legal status- "not a path to citizenship," or a path to anything, but a bus ticket home if they break the law.

Local schools and hospitals are straining to accommodate illegals, even here. Last year, there was a terrible auto/truck crash on Turkey Trot Road. No one of the six injured could speak a word of English, and neither driver was licensed. A local bilingual resident happened by and served as translator for the police and ambulance personnel.

Last year, a popular nun in Virginia Beach was killed in a DUI accident by a repeat offender illegal with no license. He had not been deported, even though he had a rap sheet a mile long.

People here realize that Democrats will not enforce immigration law. So does half of Central America, including the estimated 34% non-Mexican. (Some leave Arabic literature behind in the desert.) Eric Holder sees a potential law suit behind every detention and traffic stop.

Progressive pundits also say that it was just a low turnout election, where a few "zealots" had exaggerated impact. This is BS- the turnout was 34% higher than in 2012, including an estimated 10,000-15,000 rich white Democrats, who hated Republicans and wanted to ruin the Republican primary by picking what they thought was a losing candidate.

There was a libertarian streak to all this. So stop taxing us (even the water that runs off our roofs, as measured by satellites); stop regulating us; stop stealing our land under eminent domain and environmental tyranny. "We did not vote for all this misery being inflicted on us; so leave us the Hell alone."

We hunt and fish. We love our guns, our horses, and our hounds. We resent ObamaCare asking us "Do you have a gun?" when we go in for a medical appointment. We know the history of "gun control" in Cuba, the Soviet Union, Nazi Germany, China, etc.

We are proud of our history. One farm still has a brick granary burned out in the War Between the States by that infamous Yankee West Pointer Dahlgren. We take care of our own through the Goochland Free Clinic without government money or regulation. We develop great athletes (Russell Wilson and Verlander) and take pride in their victories.

We send our sons to VMI and to the Marines. We were enraged by the probable-deserter Bergdahl exchange for the five of the worst terrorists in the world. The celebratory ceremony in the Rose Garden with the Arabic-speaking bearded father spouting Islamic prayers was bizarre.

We resent Eric Holder using law suits to jam mosques down our throats.

We are angry that ministers feel compelled to remove the American flag from our churches, under threat of government sanction, or some misguided understanding of the Constitution.

We are sick of Republican Party leaders publicly ridiculing us.

It was a perfect storm.

If the Republicans are stupid enough to nominate Jeb Bush ("illegal immigration is an act of love"), and we need the federal government to tell Goochland High School how to educate and feed its children via Common Core and Michelle- mandated school lunches from the Agriculture Department, etc, Hillary can start measuring the drapes in the White House.

A tsunami is coming in November!

PS. A gardener friend explained it this way this morning- "people forget that we are only 50-100 miles away from DC- close enough to smell the stench!" The anger is raw and it is real.