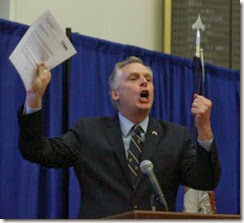 Gov. Terry McAuliffe is proposing expanding Medicaid under a two-year pilot that he says could end at that time without financial penalty to the state.

He unveiled his plan this morning, the first day of a special session when lawmakers return to Richmond to try and pass a two-year budget.

McAuliffe said he has assurance from the Centers for Medicare and Medicaid Services that Virginia can launch a two year pilot to use the federal funds and get out of it with no obligation.

The letter he said opens the door for "a pragmatic and balanced approach to closing the health care coverage gap."

With the CMS assurance, "there can be no more excuses," he said.

If expansion ends, he says he will take the responsibility.

"It's a risk that I am willing to take for our families from one end of Virginia to the other."

"Everybody else is off the hook," he said.

His version of the budget includes 104 amendments to the spending plan that then-Gov. Bob McDonnell proposed, including a 2% pay raise for teachers and state workers.

McAuliffe spoke before a packed house of administration officials, lawmakers and media at the Patrick Henry Building in Richmond.