Home » »Unlabelled » Eric Cantor makes Drudge Report – but not in a good way!

Eric Cantor makes Drudge Report – but not in a good way!

Admin Note: The Republican Primary between Eric Cantor and Dave Brat is June 10th. Voting is at your normal voting location. Learn more about Dave Brat, the ONLY conservative choice here: www.davebratforcongress.com
Article by Jamie Radtke  -  4/23/2014 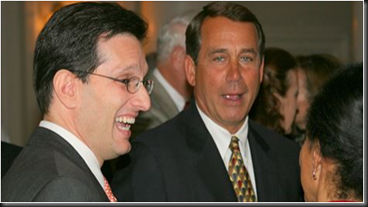 The Drudge Report has published an above-the-fold article today titled, “REPORT: CONSERVATIVES LOOK FOR ALTERNATIVE TO ERIC CANTOR…” It seems that it might not just be the 7th VA District voters that are tired of Eric Cantor’s antics, but also his fellow Republican colleagues in the House of Representatives. It seems that conservatives in the House don’t want Boehner or Cantor as their next Speaker of the House, as multiple news sources have reported lately.

According to the Breitbart story, conservatives are upset with Eric Cantor over a litany of issues: single-handedly sneaking a Medicare vote through the House by a voice vote THAT EXPANDED OBAMACARE, supporting an anti-conservative PAC that is funded by unions, partnering with Democrat Maxine Waters on a flood insurance bill opposed by conservatives,crafting his own version of the DreamAct amnesty bill for illegal immigrants (see PJMedia), voting for a clean debt ceiling increase that few of his Republican colleagues supported, and shepherding through (with the help of Democrats) one of the the biggest federal government cronyism projects – the  Import/Export Bank.  (If you want the details and background on the aforementioned issues listed, please read the Breitbart article or PJMedia):

“If you are going to replace Boehner, it has to be with someone like Congressman Jeb Hensarling, a conservative who can unite the entire caucus. The other problem with Cantor is, at least you know where Boehner stands on issues. With Cantor, you never know what to believe,” Walsh added.

The latter sentiment – that Cantor is ideologically unpredictable, to put it one way – is something that comes up repeatedly in conversations with lawmakers on the right flank of the House Republican conference.

“Cantor — he doesn’t even have an ideology,” one GOP lawmaker said in a recent interview.

This recent scathing commentary about Eric Cantor are just the latest in heavy criticism that Cantor has received from his House colleagues. The article went on to say that:

In the last two years, Cantor, who has engaged in at least four concerted “rebranding” makeovers of his public image, has veered sharply in the other direction, strongly backing Boehner and moving to the center.

The shift has included moves like bringing a Democratic version of the Violence Against Women Act that most Republicans considered unconstitutional to the House floor, which passed in violation of the Hastert Rule. Cantor was also one of 28 Republicans who voted in February to pass a clean debt ceiling increase.

Cantor “would only be putting a well-trained and obedient prince on the throne in place of the king,” a senior GOP House aide said.

All of this news is interesting when you consider the most recent false attacks that Eric Cantor has levied against his Republican Primary opponent, Dave Brat, in mail, robocalls, TV commercials and radio ads:

“Professor David Brat has kicked off his campaign pretending to be a conservative, but don’t be fooled. Professor Brat once served as then Governor Tim Kaine’s hand-picked economic advisor and is no friend of conservatives. We don’t need a protégé of Senator Tim Kaine representing us in Washington.“