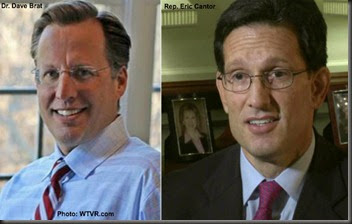 AHHH!! I heard Eric Cantor's radio ad today, in which he tries paint Dave Brat as a "liberal college professor." I swear Cantor and his minions have no shame. They will climb a tree to tell a lie rather than stay on the ground and tell the truth.

Remember how he did the same thing to me? Every mailer or ad he ran tried to paint me as a liberal. That's how he fools his base, the low-information voters. Just keep repeating the lie often enough and there are people who will believe it. Hmm, where have I heard that before? Well, folks, I have talked extensively with Dave Brat for Congress and I feel like I have a good grasp of who the man is. So much so that he has my support and my vote come June 10.

Don't allow Cantor to get away with his lies. Spread the word. Ask everyone you know to spread the word, as well. Dave Brat is not a liberal and is a real alternative to Cantor and his self-serving ways. Get in touch with Dave Brat's campaign and do whatever you can to help. Send out e-mails, Facebook messages, make phone calls, walk neighborhoods, anything that you can do. It will go a long way to helping us get rid of Eric Cantor.

My name is Floyd Bayne, voting citizen of Virginia's 7th district, and I approve this message.

Read Just How NOT liberal Dave Brat is Right Here