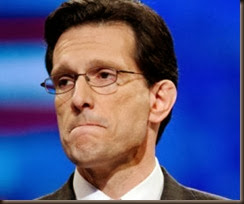 On February 13th, 2014, Eric Cantor has published an article entitled:

An America That Works - The House GOP lays out its agenda.

When you read it it sounds good, all the conservative talking points. You read it and want to say “yeah, yeah!”

One, it is couched carefully with the conservative talking points with Republican versions of Big Government programs.

Two, its missing specifics. Eric Cantor and other big government politicians of both parties are great at spewing out the rhetoric they need to win elections, but then turn around and do nothing, because they promised nothing specific.

And Three, its all lies. He doesn’t mean one word, but just pays lip service and promotes a few bills that match the rhetoric. He turns around and does the opposite, then tells the low information conservative voters that he is fighting for them, like in this recently published letter. And like the sheep they are, that don’t look to see if Cantor’s conservative rhetoric matches his voting record, blindly re-elect him.

Read and judge for yourself if I am right: Eric’s Article