Home » »Unlabelled » Surprise? Eric Cantor caves with Boehner and teams up with the Democrats to raise the Debt Ceiling until March 2015

Surprise? Eric Cantor caves with Boehner and teams up with the Democrats to raise the Debt Ceiling until March 2015 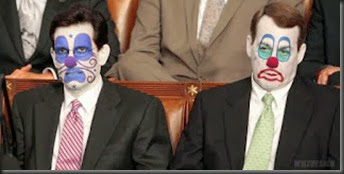 Does it surprise the voters in the 7th District of Virginia that Eric Cantor, in the coat tails of John Boehner, voted like a progressive again?

Eric Cantor is NOT a conservative anymore, if he ever was. Its time to vote for either Peter Greenwald or David Brat in the June Republican Primary against Eric Cantor.

Cantor brands himself as a conservative and a representative for the working family. This is a blatant lie. Cantor works not for Main Street, but for the Corporatist Wall Street who buys government favor. Many might say are you attacking the Free Market System? No, what we have is NOT the free Market, but Crony Capitalism where Big Corporations buy our politicians of both parties, Democrat and Republican, to help privatize their profits and uses tax payer to bailout their loses. Cantor voted for all the bailouts, instead of letting these companies bail themselves out. He also, hasn’t met a Debt Limit Increase he didn’t like.

After a frantic few days, the House voted 221-201 to lift the debt ceiling until March 2015, removing the threat of a default until well after the November midterm election. The bill was supported by 193 Democrats and just 28 Republicans.

It’s a reversal for Speaker Boehner (R-Ohio), who, in 2011, said that when Congress raises the debt limit, it should also enact budget cuts of equal or greater magnitude. It’s also a clear sign of the House Republican Conference’s inability to move beyond fiscal fights and lays in plain view the leadership’s inability – or unwillingness – to corral votes for their priorities.