Fight Back: NSA Spying on Americans 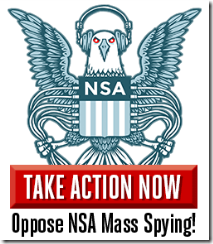 The US government, with assistance from major telecommunications carriers including AT&T, has engaged in a massive illegal dragnet surveillance of domestic communications and communications records of millions of ordinary Americans since at least 2001. Since this was first reported on by the press and discovered by the public in late 2005, EFF has been at the forefront of the effort to stop it and bring government surveillance programs back within the law and the Constitution.

History of NSA Spying Information since 2005

News reports in December 2005 first revealed that the National Security Agency (NSA) has been intercepting Americans’ phone calls and Internet communications. Those news reports, combined with a USA Today story in May 2006 and the statements of several members of Congress, revealed that the NSA is also receiving wholesale copies of American's telephone and other communications records. All of these surveillance activities are in violation of the privacy safeguards established by Congress and the US Constitution.

In early 2006, EFF obtained whistleblower evidence (.pdf) from former AT&T technician Mark Klein showing that AT&T is cooperating with the illegal surveillance. The undisputed documents show that AT&T installed a fiberoptic splitter at its facility at 611 Folsom Street in San Francisco that makes copies of all emails web browsing and other Internet traffic to and from AT&T customers and provides those copies to the NSA. This copying includes both domestic and international Internet activities of AT&T customers. As one expert observed, “this isn’t a wiretap, it’s a country-tap.” Secret government documents,  published by the media in 2013, confirm the NSA obtains full copies of everything that is carried along major domestic fiber optic cable networks.

In June 2013, the media, led by the Guardian and Washington Post started publishing a series of articles, along with full government documents, that have confirmed much of what was reported in 2005 and 2006 and then some. The reports showed - and the government later admitted  - that the government is mass collecting phone metadata of all US customers under the guise of the Patriot Act. Moreover, the media reports confirm that the government is collecting and analyzing the content of communications of foreigners talking to persons inside the United States, as well as collecting collecting much more, without a probable cause warrant. Finally, the media reports confirm the “upstream” collection off of the fiberoptic cables that Mr. Klein first revealed in 2006.

(See EFF’s How It Works page here for more)

EFF Fights Back in the Courts

EFF is fighting these illegal activities in the courts. Currently, EFF is representing victims of the illegal surveillance program in Jewel v. NSA, a lawsuit filed in September 2008 seeking to stop the warrantless wiretapping and hold the government and government officials behind the program accountable. In July 2013, a federal judge ruled that the government could not rely on the controversial ‘state secrets’ privilege to block our challenge to the constitutionality of the program.  This case is being heard in conjunction with Shubert v. Obama, which raises similar claims.

Also in July, 2013, EFF filed another lawsuit, First Unitarian v. NSA, based on the recently published FISA court order demanding Verizon turn over all customer phone records including who is talking to whom, when and for how long — to the NSA. This so-called “metadata,” especially when collected in bulk and aggregated, allows the government to track the associations of various political and religious organizations. The Director of National Intelligence has since confirmed that the collection of Verizon call records is part of a broader program. In addition to making the same arguments we made in Jewel, we argue in Unitarian First Unitarian v. NSA that this type of collection violates the First Amendment right to association.

Previously, in Hepting v. AT&T, EFF filed the first case against a cooperating telecom for violating its customers' privacy. After Congress expressly intervened and passed the FISA Amendments Act to allow the Executive to require dismissal of the case, Hepting was ultimately dismissed by the US Supreme Court.