Home » »Unlabelled » Eric Cantor IS NOT Working for you. Wake Up Folks! Fire Eric Cantor by Hiring David Brat!!

Eric Cantor IS NOT Working for you. Wake Up Folks! Fire Eric Cantor by Hiring David Brat!! 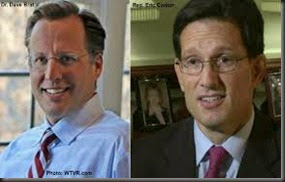 Folks, do you understand just how stupid and uninformed Eric Cantor thinks/hopes you are?!

He claims to care about the "little people," when it comes to anything to do with Obamacare, but Cantor just recently introduced legislation to cut overtime pay for hourly workers.

Do you see the party partisanship now?! Democrats do it = BAD! Republicans do it = GOOD!

Also keep in mind that Eric Cantor was behind the move in Congress to have that august body only work 129 days in 2013, while still getting paid over $175K. Please don't fall for his BS again.

AHHHHH!!! THIS MAN IS ABSOLUTELY OUT OF HIS MIND! He says spending is the problem the same week he votes to send ONE BILLION DOLLARS to Ukraine! WTH!

Folks, I'm going to say it right here and now, and I don't care who it pisses off. You can spread this to any and all of your Republican friends if you like, because many of them need to see this.

IF YOU VOTE FOR ERIC CANTOR AGAIN NOT ONLY ARE YOU PART OF THE PROBLEM, BUT YOU ARE A BLITHERING IDIOT! I dare anyone to try and defend this man's behavior.

Are you paying attention?

Time to call Eric Cantor back home. Vote for Dave Brat for 7th District Congressman! A real conservative for the people.