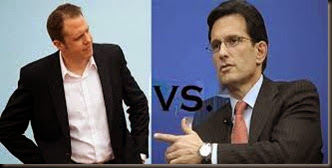 Doc Thompson, with Glenn Beck’s The Blaze radio, spent his morning show delving into the question, ‘who is Eric Cantor?’ According to Doc Thompson, many people might be disturbed by some of Eric Cantor’s actions if they were ‘exposed’ to the larger public.

Doc Thompson interviewed Eric Cantor’s Republican Primary opponent, Dave Brat, and they spent considerable time discussing the effort by Cantor, his consultant Ray Allen, and his Young Guns PAC, to get intimately involved in local GOP politics and remove the right of conservatives to attend and vote in upcoming Republican conventions – a practice known as slating. We have discussed this in detail on The Bull Elephant. You can go here and here and here to read about just a few examples of this deplorable tactic that Cantor’s folks are using to silence the conservative grassroots.

Doc Thompson then had Sara James on (founder of the Richmond Tea Party) to discuss her blog post on Eric Cantor’s involvement with the Stock Act. In short, a bipartisan effort in Congress was undertaken (which is extremely rare) to make it illegal for politicians to participate in insider trading. Sort of appalling to think it was ever allowed in the first place! At the last minute Cantor amended the Stock Act so that spouses and family members were excluded! It basically neutered the Stock Act bill, while politicians were able to return to their constituents and claim they had closed the insider trading loophole. It was quite a beautiful Kabuki Dance by Eric Cantor. This is the exact type of political gamesmanship that sickens voters. It is politics in its worse form.

Doc Thompson also discussed Eric Cantor’s connection with Main Street PAC, which has some interesting donor connections. Steve LaTourette, a former moderate Republican member of Congress and current Lobbyist with Main Street PAC, has stated that his goal is to take out the Tea Party and so-called ‘far-right Conservatives.’ This PAC has received donations from unions, Soros connected money, and money from Democrats. You can read all about this story at RedState.

Lastly, Doc Thompson brought up the apparent conflict of interest of Eric Cantor’s wife, Diana Cantor. I have seen other bloggers and many on Facebook express contempt at Doc Thompson for talking about Cantor’s wife – as if he crossed some insidious red line. Here is the problem though – the Washington Post reported that after Diana Cantor was appointed Chairman to the Virginia Retirement Systems Board,  Bank of New York Mellon (which is the bank the Virginia Retirement System pays to hold all their pensions and funds) started maxing out each year to Cantor’s PAC.  The post stated that:

READ THE REST OF THE ARTICLE HERE