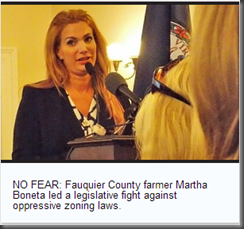 “No Virginian should be forced to lose everything when they fight city hall,” said Boneta, who is locked in a costly legal battle with Fauquier County officials over use of her farmland.

“Now farmers can farm without fear or fees,” Boneta told Watchdog.org in an interview. “It gives hope to farmers and landholders in the fight for property rights.”

“In all my years running to Richmond for relief of some injustice, I’ve never seen a piece of legislation receive the traction and broad support,” said Joel Salatin, owner of Polyface Farm in rural Swoope, Va.

“To have Virginia agribusiness, the Farm Bureau and  VICFA (Virginia Independent Consumers and Farmers Association), to name a few, on the same side is truly a feat for the record books.”

Boneta’s battle in Fauquier, as first reported by Watchdog, exposed inconsistent, even oppressive, local zoning and permitting rules in a state that prizes its “freedom to farm.”

“Corn mazes and pumpkin carvings were considered ‘events’ that required site plans and a mile-long list of red tape that can be suffocating,” Boneta noted.

For conducting a children’s birthday party on her Paris Barns property, Boneta was threatened with thousands of dollars in fines by Fauquier officials. She has countersued for $2 million.

The Virginia Association of Counties complains the Boneta legislation “continues the trend toward more land-use decisions being made in Richmond, rather than localities, where land-use issues are more appropriately worked out.”

Obenshain’s bill passed the House and Senate by a combined 138-1. 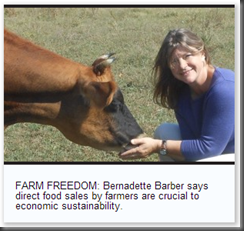 Bernadette Barber, founder of Virginia Food Freedom, said, “There is an illusion that farmers are allowed to (direct) sell all their products because there are farmers markets and one-day bake sales.

“Fact is, these are exemptions” granted at the whim of government, she noted.

“I have 33 acres, with cows. If I had the ability to sell all my farm products (including raw milk) directly to the public, I could make $56,000 a year,” Barber figures.

But not under existing regulations.

“Martha’s bill prevents counties from imposing a $100 fee to grow tomatoes. We would love to make spinach into spinach lasagna,” Barber told Watchdog.

The Bell initiative ran into killer opposition from the Virginia Farm Bureau and medical experts who branded it a competitive threat and a potential public-health hazard.

“We don’t want to be the next Kraft or Little Debbie shop. We want local consumers to be able to shake the hands of the person who make our food,” she said.

Salatin, a national leader in the food-freedom campaign, called the Boneta bill “a sign of things to come because it means the integrity-food side is gaining clout.”

“I hope this adds to the momentum for recovering or protecting even more individual freedoms.”