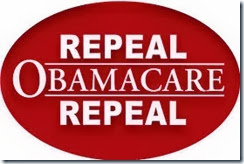 Over the next week it is critical that we be vigilant in contacting all our delegates and senators with the following message:  “Protect our healthcare by stopping the expansion of Obamacare.
Please vote for a clean budget - say no Medicaid expansion!”

We have a showdown!!

Here are the budget conferees. Please contact them OFTEN and tell them NO!

The House Republicans are going to be hammered by the press, hospital lobbyists, MoveOn.org, the Governor and any other business that will benefit from billions of your tax dollars.

Our success is highly dependent on our ability to provide support to the House Republicans and their leadership. We have been told on several occasions by members of the House that they need us to demonstrate there are millions of Virginians who do not want the expansion of Obamacare in VA.
___________________________

We can show our support by sending people to counter the MoveOn.org rally