Note by Admin: Look what we just dug up. I thought Eric Cantor was against the Obama Stimulus? 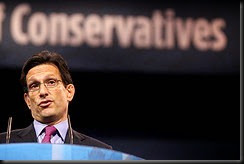 Among the Tea Partiers Newsweek uncovered begging for federal dollars, one name stood out. House Majority Leader Eric Cantor requested tens of millions of federal stimulus dollars to create jobs in his district.

During a March 1, 2009 appearance on ABC’s This Week, Rep. Cantor said that the government can’t create jobs, “And what we see in this budget, frankly, is an attempt, again, to try and stimulate the economy through government expenditure. And, you know, at best what that can do is redistribute wealth. It can’t create jobs; it can’t create wealth. We’ve got to get back to focusing on job creation and creating prosperity.”

Newsweek has uncovered letters that show Rep. Cantor requesting hundreds of millions of stimulus dollars for his district at the same time; he was publicly claiming that government can’t create jobs.

Just a month after going on ABC and claiming that the government can’t create jobs, Cantor sent a letter to Transportation Secretary Ray LaHood to request almost $75 million in federal stimulus funds for the I-95 high speed rail project. Cantor along with Rep. Bobby Scott wrote that, “High speed rail provides a sensible and viable solution to our region’s transportation challenges. It is estimated that creating a high speed railway through Virginia will generate as many as 185,500 jobs, as much as $21.2 billion in economic development, and put nearly 6.5 million cars off the road annually.”

In 2010, Eric Cantor wrote in the book Young Guns: A New Generation of Conservative Leaders that, “Government doesn’t create jobs and build wealth; entrepreneurs, risk takers and private businesses do,” but just months earlier he was still requesting federal money for job creation.

In October 2009, Cantor and several other Congressmen from both parties sent a letter to Transportation Secretary Ray LaHood for $60 million in federal funds to be added to the Title XI Ship Loan Guarantee program. Cantor and the others wrote, “Once an application for a Title XI loan guarantee is approved, the construction order is immediately placed in a shipyard, instantaneously creating and sustaining thousands of jobs in the shipyard and supplier base for two to three years.”

While speaking the language of the tea party publicly, Eric Cantor was doing the exact opposite privately. It turns out that Cantor knows that government spending creates jobs. He admitted as much in his own letters. The tea party and Republican voters have been sold an empty bill of goods. Their leaders talk about cutting government spending publicly while angling privately for more taxpayer dollars for their districts.