More than 43,000 people are petitioning Congress to permanently ban taxes on Internet access. 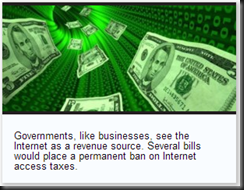 Governments, like businesses, see the Internet as a revenue source. Several bills would place a permanent ban on Internet access taxes.

As of early Monday afternoon, 43,646 had signed the online petition on Change.org, sponsored by MyWireless.org, a nonpartisan nonprofit wireless advocacy organization.

“Internet access is a critical necessity for economic growth, and is also providing all of us tremendous benefits in our daily lives,” said Amy McLean, communications director of MyWireless.org.

“With more and more Americans turning to wireless as their primary means of accessing the Internet, we think it’s more important than ever for people to weigh in now on the importance of keeping service as affordable as possible,” said McLean.

The organization is currently promoting a number of initiatives, including the Wireless Tax Fairness Act, which places a five-year moratorium on new wireless taxes at the state and local levels.

Not only would the bills prevent state and local governments from taxing Internet access, they would also prevent multiple taxes from being imposed upon an online purchase by ensuring that only one state can tax each transaction.

MyWireless.org hopes to keep the cost of broadband access down for consumers.

“The petition is a collective voice supporting the permanent extension of the ban on Internet access taxes, and sends a clear message to Congress to take action on behalf of hundreds of millions of American wireless consumers,” McLean said.