In this MegaVote for Virginia's 7th Congressional District: 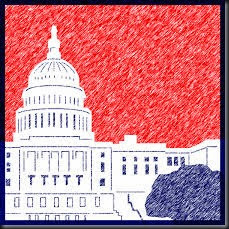 The Senate agreed upon a substitute amendment offered by Sen. Robert Menendez, D-N.J. to a Ukrainian aid package on Thursday. As amended, the bill would offer $150 million in aid to the Ukrainian government and offer loan guarantees from unobligated funds in the State Department budget. It would expand visa restrictions, freeze the assets of Russian officials and require the Defense Department to review Russian military capabilities annually through 2020. As amended, the bill passed by voice vote later that day.

The Senate invoked cloture on a bill that would exempt volunteer service hours by firefighters and other first responders from the 30-hour-a-week threshold under the 2010 health care reform laws that established a full-time employer mandate for health coverage. The bill is intended to serve as a legislative vehicle to extend expired long-term unemployment benefits.

The House narrowly approved a bill on Wednesday to limit the power of the president to designate national monuments under the 1906 Antiquities Act. The bill would limit presidential authority to one designation per state over a four-year term. It also would require an environmental impact statement for designations over 5,000 acres and a cost estimate study for the proposed monument. Sites less than 5,000 acres would expire after three years without a full environmental review, but could be made permanent if the environmental review process was used.

On Thursday, the House approved a $120 million aid package to Ukraine and expanded sanctions against Russian government officials in the wake of that country's annexation of Crimea. The bill easily cleared the two-thirds majority required for passage under a suspension of House rules.