Eric Cantor Deceives His Fellow Members, His Constituents & Himself

By Sara for America (Read More Stories Like this Here) 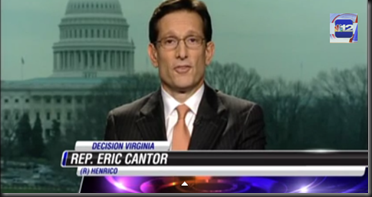 NBC’s Ryan Nobles recently interviewed Eric Cantor, asking him to respond to charges made by primary opponent Dave Brat that Cantor was engaging in political tactics meant to silence conservatives.

Cantor responded with typical talking points,  without answering the question, or mentioning Brat by name.

That’s how he rolls. Cantor’s history is one of never acknowledging his conservative opponents until forced to do so.   Debate with lesser souls?  That would require defending his record.  Cantor won’t risk opening that up for attack, preferring to run on name ID and consultant driven cliché.

Nobles:  He’s been pretty critical of you, on many national radio shows, conservative radio shows in fact, he’s accused you of not being an authentic conservative and he’s also accusing you of manipulating the grassroots of the party in order to engineer some sort of outcome in the primary.  How would you respond to some of this criticism that he’s leveled in your direction?

Cantor:  Well Ryan, what I believe is that the people in the 7th District of VA aren’t really waking up and looking at jockeying by one person or another or which side is up, which side is down,  what they’re worried about frankly, is how they’re going to make it through the month,  whether their job is still going to be there,  what can Washington do to get out of the way,  so they can see America work for them again.

How can we go in and have lower health care costs?  How can we make sure we address the skyrocketing costs of college tuition?  How do you help people? There’s a big difference in Washington and in VA and across America about ways to approach that. I disagree with much of what this President is about and the kind of big government imprint that he wants to leave.  I believe strongly in individual responsibility, accountability, the freedom to work, the principle of hard work, I believe we ought to roll back unncessary government regulations to create space for the private sector businesses, communities, churches, places of worship, families to go out and thrive.   And I think that what people want to see are those kinds of solutions they want to hear about those of us who are advocating on their behalf so their life can work again and America can be that place where they have a brighter future for themselves and their kids.

Cantor:  Well, we’ll have to see WHEN THE ELECTION SEASON GETS GOING, right now there’s  a lot of work to be done on behalf of the people who elected me and the others to Washington to see if we can act and focus on solutions to try to set aside differences and arrive at a better result that can produce a better future.

Roll tape.  Cantor recites this in his sleep. A couple of things instantly struck me about this talking point blather.

First, the part where Cantor attempts to portray himself as some kind of populist who cares about the guy worried about his job is just the height of ridiculousness.  This weekend Cantor will be giving a keynote at the #Crush Conservatives meet-up of the center-right moderate Republican Main Street Partnership PAC on Amelia Island.   It’s been well documented over the past few weeks as to who else will be in attendance:  labor union reps,  pro-amnesty heavy hitters, etc.

Brian Schoeneman,  who has publicly proudly proclaimed his affiliation with the Main Street Partnership, exposed the mentality of his fellow so-called moderate Republicans the other day on his Bearing Drift blog.  Said Schoeneman:

“I don’t buy that [the middle class is] shrinking. “They’re the  majority and still are the majority.”

“There are a lot of statistics there, but I don’t see anywhere that the size of the middle class is shrinking.” **

It is true that Mr. Schoeneman  does not speak for Cantor, but he surely does speak for himself and he is a member of Steve LaTourette’s group.  These people are the ones that Cantor is meeting with and who influence his thinking and actions.

So all that pandering blather from Cantor about jobs and making it through the month….give us a break.

Secondly, Cantor starts his interview saying that he believes he knows what the people in his District think.   How the heck would he know?  When was the last time he held a townhall, when did he last roll up his shirtsleeves to walk among the people in his district?  I’m not talking standing behind a podium giving a speech.  How often does he listen?

It appears he hardly listens to the other reps in his House caucus.  In an article titled  Republicans:  GOP Leaders Deceived Us, Russell Berman of The Hill writes how Cantor’s maneuvers on a recent vote on the ‘doc fix’ angered fellow members:

The leadership on Thursday had abruptly put up a bill to prevent a cut in Medicare reimbursements to doctors, passing it by voice vote rather than holding a recorded roll-call vote. Few members were on the House floor to object, angering conservatives who accused the leadership of subverting the democratic process.

“I’m getting used to being deceived by the Obama administration, but when my own leaders do it, it’s not acceptable at all,” Rep. Matt Salmon (R-Ariz.) said.

And more from Roll Call:

Then, at a private meeting of the conservative Republican Study Committee later in the afternoon, members challenged Majority Leader Eric Cantor, asking the Virginia Republican to explain why leaders pushed the bill through without allowing members to cast their votes.

It remains unclear whether there will be any lasting implications to the tactic, but members are still angry and say leaders have yet to satisfy their complaints.

“What I didn’t hear was, ‘I promise this’ll never happen again.’ I think that’s something that has to happen,” Rep. Steve King, R-Iowa, said. “It isn’t that anyone broke their word at this point, but they need to give their word.”

At a weekly morning meeting of the House Republican Conference, Boehner told the room that he wanted to have a “family discussion” about the way the vote happened. Members of both parties told the press last week that they were angry leadership passed the “doc fix” by voice vote when it was clear there were not enough votes to pass it on a roll call.

Reps. Thomas Massie of Kentucky and Louie Gohmert of Texas were the most outspoken critics of leadership’s tactic at the meeting, according to sources in the room.

“There was some ventilation about it. Some members are very unhappy, claiming that it’s anti-democracy,” Rep. John Fleming, R-La., said…….……..“The staff were giddy, almost like they shot off a firework and ran and got away with it,” [Massie] said. “It made me feel sick.”

What Dave Brat represents is an opportunity to start the long road back to returning Congress to the people.  A chance to take it away from “leaders” like Cantor who refuse debate, who refuse to listen to anyone except big donors, who employ tricky political maneuvers to shut opponents out of the process.  No more opaque-y stealth votes, particularly where constituents are the LAST people consulted about which way the vote should go.  If they are consulted at all.  When was the last time you were consulted?

Apparently Leader Cantor and his henchmen consider themselves the Enlightened Ones.  Who provides the enlightenment?  Organizations like the Republican Main Street Partnership PAC, a political action committee that opposes true conservative candidates and that takes money from labor groups like the Service Employees International Union, the AFL-CIO, the United Food and Commercial Workers International Union and the United Transportation Union PAC.

When Cantor attends the meeting at the Ritz-Carlton this weekend, please take solace in  his repeated assurances that you are on his mind, and that he will be worried about how his constituents are “going to make it through the month,  whether their job is still going to be there,  and what Washington can do to get out of the way,  so they can see America work for them again.”

Then he’ll dig into a filet, and after dinner schmoozing in the bar, deceiving himself that primaries are beneath him and the election season is yet to get going.