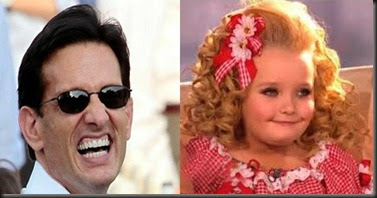 OK, yet one more example of Eric Cantor counting on uninformed, lazy voters to stay in office. You know, the voters who don't pay any attention to politics until a few weeks before an election and then they just watch TV or read the newspaper to see how they should vote. Cantor is counting on the fact that most Americans memories can't seem to go back any further than last week's episode of American Idol or Hunny Boo-Boo.

I just heard another of Cantor's radio ads. This one starts out telling us that "Obama just attacked Cantor, because Cantor is trying to stop his agenda." Uh huh. It then tells us how Cantor has been working sooo hard to stop spending and cut taxes, blah, blah, blah. Well, if he has been doing that then he really sucks at it, but that is not the point here.

I want to ask those who still defend Cantor if they remember as far back as February of this year, a mere 2 1/2 months ago? Allow me to refresh your memory. Just read the two articles I have linked here. Then tell me how allowing Obama an unlimited spending ceiling is "fighting" Obama's agenda. I can't wait to see how you defend this one.