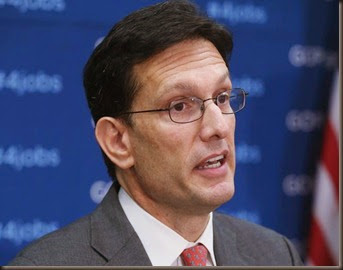 Cantor brands Tea Party-backed Dave Brat a "liberal college professor" because he served on the Governor's Advisory Board of Economists "while Kaine tried to raise our taxes." But the board provided professional economic forecasts, not advice on tax policy.

Brat, a lifelong Republican who chairs the department of economics and business at Randolph-Macon College, is far behind in the fundraising battle for the Republican primary in Virginia's 7th Congressional District. Records show Brat has raised just under $90,000. As of the end of March, Cantor had more than $2 million cash on hand. But Cantor is taking Brat's challenge seriously enough to air this attack ad.

Here's the text of the ad, called "Advisor":

Narrator: College professor David Brat is running against our conservative congressman Eric Cantor. But Brat worked on Democrat Gov. Tim Kaine's Council of Economic Advisors while Kaine tried to raise our taxes by over $1 billion on cars, insurance and income. Now, liberal David Brat is running for Congress as a Republican. Liberal college professor? Tim Kaine adviser? Republican? Come on professor, you've got to be kidding.

It's true, as a Cantor campaign website noted, that Brat was originally appointed to the board by Kaine in 2006. But Brat continued to serve on the board under Kaine's Republican successor, Gov. Bob McDonnell, as well. That's not unusual. Many JABE members have served under multiple governors, both Republicans and Democrats.

It's also true that in 2009, then-governor Kaine proposed a combination of spending cuts and increased taxes to address a projected budget shortfall. Specifically, Kaine called for a 1% increase in the state income tax to offset the proposed elimination of the local car tax. The GOP-dominated House of Delegates rejected Kaine's plan.

Ray Allen Jr., a political adviser to Cantor, told us the ad makes two factual claims, and that "no one is disputing the actual facts." At least not separately.

Strung together, however, the ad implies that Brat advised Kaine on taxes, and that's not the case. The board's old name — the Governor's Advisory Board of Economists — may contribute to the confusion. While the name may suggest the board provides the governor with sweeping economic advice, the board's mission is actually very narrow: to provide forecasts of national and state economic growth. According to Virginia Code, JABE is charged with providing economic forecasts based on "economic assumptions and technical econometric methodology."

Finance Secretary Ric Brown told our fact-checking colleagues at PolitiFact Virginia that the board on which Brat served was "part of an overall process that does feed into the revenue process and policy changes." But he said the board does not make tax recommendations.

Roy Webb, an economist with the Federal Reserve Bank of Richmond who has served on JABE for five Virginia governors (including Republicans and Democrats), said it is a "nonpartisan group that has a narrow interest on a very technical subject: to forecast the economic activity so that it can be used for the state's budget. In that sense, it is very straightforward. Is the economy going to be weak or is it going to be strong? It could be seen as a basic feature of good government. It makes it harder for any administration to come up with a budget based on some crazy forecast."

Webb said Brat's work on the board did not betray any partisan leanings, as the work is nonpartisan. But Brat's comments outside of their meetings, made it "clear that he's distinctly right of center," Webb said. "But how does that affect making the case for a strong or weak economy?"

Brat told us he would have been against tax increases — "I'm on the Republican side of the agenda" — but those kinds of political opinions have no place in his role on JABE.

"That's not an issue that belongs in the conversation," Brat said. "I wasn't an elected official to represent anybody. That's not part of what we did."

McDonnell spokesman Jeff Caldwell told Watchdog.org at the time that isn't the role of JABE.

We asked the Cantor campaign for other back-up for its claim that Brat is a "liberal college professor." Allen said it is a long campaign (the primary is on June 10), but he provided no other evidence besides the fact that Brat served on JABE under Kaine.

Since 2005, Brat has been a special legislative assistant to Virginia State Sen. Walter Stosch, a Republican Senate leader. In 2013, Brat was appointed by McDonnell, a Republican, to serve on the Board of Accountancy. And despite an image in the ad of Kaine wearing a "Go Dave!" button, Sen. Kaine's press office assures us Kaine is not supporting Brat.

Brat said he tries to not reveal his political leanings in his job as a professor, though he allows that his research has tended to focus on the ideas of Milton Friedman, a proponent of free market economics and minimal government intervention who served as an adviser to President Ronald Reagan.

Three of Brat's colleagues in the department of economics and business at Randolph-Macon College scoffed at the characterization of Brat as a "liberal college professor."

"Many collegiate faculty are branded as being 'liberals,' by stereotype," George S. Lowry, professor of business at Randolph-Macon College, told us via email. "In my opinion, David Brat most certainly does not fit this stereotype. The campaign ad is not an accurate description."

Added Barry Pfitzner, a professor of economics at Randolph-Macon College, via email: "In my experience (his office is next to mine and has been for years), that label, for Dave, could not be more inaccurate."

"Dave Brat is not a liberal college professor," said Paul Sikkar, a CPA in the department, via email. "He is often bumping heads with his constituents with his conservative views. The Cantor ad regarding Dave Brat is flat out wrong."