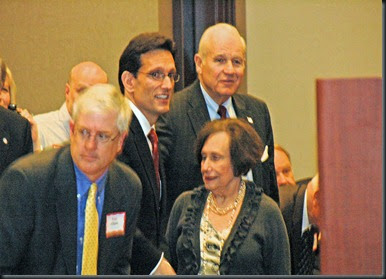 Sources tell PJ Media that House Majority Leader Eric Cantor’s long-time top consultant, Ray Allen, has “angrily” stated to multiple individuals that he intends to bankrupt the Republican Party of Virginia (RPV), to install his own people throughout all levels of RPV’s State Central Committee, and to rebuild the RPV with money from Eric Cantor’s donors.

Ray Allen is considered the “brain trust” of Eric Cantor’s Young Guns, which has spent hundreds of thousands of dollars and has hired staff with the intention of retaking control of the RPV at all levels. (Eric Cantor and Ray Allen lost control of the RPV in 2012, when Tea Party/conservative candidates won seats at all levels of the party, taking majority control from Cantor allies.) In this effort to reclaim the majority, Ray Allen has helped orchestrate the parliamentary procedure of “slating” at several RPV conventions this season.

Slating involves disenfranchising all properly registered delegates at a district convention in favor of a vote by only a few dozen handpicked delegates. This tactic was employed to protect the incumbent chairmanships of some Cantor allies: hundreds to thousands of Tea Party/conservative delegates have been forcefully ejected from VA RPV conventions over the past few weeks and months.

However, the ejected delegates and others opposed to Team Cantor have since had success appealing the slating attempts, leaving Allen and Cantor with little to show for their hardball tactics other than alienated constituents, a terrible local public relations problem, and worse, a rapidly gaining primary opponent in challenger Dave Brat.

Sources additionally claim that Allen has attempted to meddle in the multiple appeals of his slating attempts — Allen was reportedly looking to guide how the appeals should be conducted.

These bombshell allegations — implying that Eric Cantor’s reelection effort intends to dismantle the Republican Party of Virginia and to employ it as a vehicle for the expansion of Cantor’s power and influence — could not arrive at a more precarious moment for the Cantor campaign for two reasons:

Additionally, Cantor’s speech at the convention received boos and heckling when he attempted to denigrate Dave Brat. Cantor, receiving this treatment in his own district, appeared visibly unnerved and needed to interrupt his speech to address the hecklers.