Home » »Unlabelled » Virginia: SEISMIC SHIFT IN THE 7th: What does Cobb’s ouster mean for the GOP?

Virginia: SEISMIC SHIFT IN THE 7th: What does Cobb’s ouster mean for the GOP? 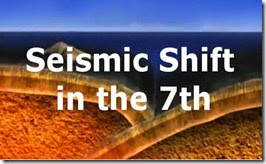 There are a number of lessons to take away from today’s shocking defeat of one of Eric Cantor’s top lieutenants in his home district. The future of the GOP depends on whether its elected leaders are willing to learn.

First, what happened? For the uninitiated, it can be difficult to read through all the inside baseball stuff about “slating” and “mass meetings” and the “Party Plan,” etc., so I’ll cut right to the chase. The big story is that Rep. Eric Cantor’s right hand man in his district, who served as that district’s GOP chairman, was ousted today at the 7th District GOP Convention by an insurgent coalition of those disaffected by the chairman’s and Cantor’s grip on local politics.

Much, but not most, of the anger channeled into bringing about this ouster has to do with a preference among many grass roots activists for nominating candidates via conventions rather than consultant-driven open primaries. But at bottom, for most of those in attendance at the 7th District GOP convention this was about finally having a seat at the table inside the Republican Party.

The Role of the Tea Party

A friend remarked to me after Cobb’s defeat that what made this possible was the unique vitality of various Tea Party groups within the 7th District. I responded, “Do you think that’s a coincidence?” In fact, it is not, but is instead a direct consequence of the way Rep. Cantor and his supporters have consistently circled the wagons around the Congressman to ensure as much control of the local politics surrounding him as possible. Where in other districts, like the 1st District where I live, Tea Party and libertarian newcomers have been welcomed into the GOP tent, in the 7th they have consistently been made to feel unwelcome inside the GOP.

Where in the 1st District my Congressman, Rep. Rob Wittman, has consistently reached out to and engaged with local Tea Party groups, and where party leaders like 1st District Chairman Eric Herr have eagerly welcomed the new energy and vitality they bring to our own processes, in the 7th the reception has been much more of a “barbarians at the gate” affair. The contrast could not be more stark: in the 1st District there is relative tranquility among various components of the conservative coalition, while in the 7th there has been open warfare. That’s because if you keep shutting people out, sooner or later you’re going to have so many people on the outside with an axe to grind that shocking upsets like the one today become almost inevitable.

Cobb supporters rightly note that he ran a very tight ship, and that all the trains have run on time inside the 7th. I even have had people praise Cobb to me by pointing out the total harmony in his 7th District meetings: everyone agrees on everything. These folks, like those advising Cantor, fail to see the irony in that: sycophantic unanimity is more a symptom of a problem than a condition flowing from superior leadership. 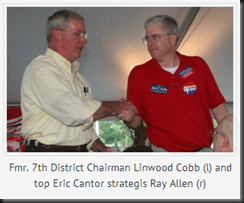 We’ve written before about Ray Allen, who is Eric Cantor’s top consultant and who has been the architect of a campaign this year to flip a number of district chairman seats to candidates friendly to Cantor—and friendly to the nominating primaries that make so much money for Allen. It’s time for Eric Cantor to fire Ray Allen, whose lack of acumen about how to handle intraparty politics since the rise of the Tea Party in 2009 has done nothing but put a huge target on Eric Cantor’s backside. The fact that Cantor has, for the first time really, a serious primary challenger in Dave Brat is no accident.