Eric Cantor gets Booed by Republicans at Virginia 7th District 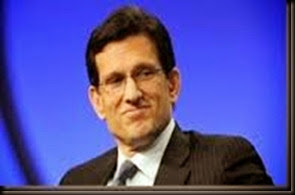 Eric Cantor got booed today, but not by liberals or progressives, but by his fellow Republican’s while he was giving a speech to the Virginia 7th District Convention.

Why did Cantor’s fellow Republicans boo him you might ask?

Well, Cantor called his primary opponent, Dave Brat, a ‘liberal college professor” at the convention. Well the crowd would have none of that lie, so they loudly booed him. They booed so loud that people couldn’t hear Cantor speaking.

Cantor wasn’t happy and even got mad and scolded the crowd.

Well, if you have been paying attention to this years primary race between Cantor and challenger Dave Brat, then you might know. Cantor has been running deceptive ads calling Dave Brat a “liberal college professor” who worked for Democrat Tim Kaine while Kaine was Governor of Virginia.

Second, Brat was appointed to be on an economic counsel by Kaine, but Brat never advised Kaine on economic policy. Brat was one of many who made economic projections, but gave no advise. Kaine clearly chose Brat because he was a conservative, and Kaine needed a token conservative on the panel for political reasons to look fair.

Well Cantor’s lies are catching up with him this time, and hopefully Dave Brat can now beat Cantor in the primary on June 10th.

Here is a news story that covers all the booing that went on today:

Cantor faces tea party fury in his back yard

Just a few miles from his family home, House Majority Leader Eric Cantor (R-Va.) felt the wrath of the tea party Saturday, when activists in his congressional district booed and heckled the second most powerful House Republican.

They also elected one of their own to lead Virginia’s 7th Congressional District Republican Committee, turning their back on Cantor’s choice for a post that is seen as crucial by both tea party and establishment wings in determining control of the fractured state GOP.

Former lieutenant governor Bill Bolling, himself pushed out of last year’s governor’s race by a similar party schism, said he was “extremely disappointed” by the results of the vote, in which longtime Cantor loyalist and incumbent Linwood Cobb was unseated by tea party favorite Fred Gruber.

“Clearly, there is a battle taking place for the heart and soul of the Republican Party,” Bolling said in a statement. “While the voice of every Republican should be heard, our challenge is to figure out how to be a conservative party, without allowing the most extreme voices of the day to control our party and determine its future direction.”

The tea party faction trumpeted the election results as a victory for core conservative principles of limited government, low taxes and a free market economy.

“There’s been an ongoing battle for years between conservatives and establishment and it’s a sweet victory when you win but you also win on the front porch of Eric Cantor,” said Jamie Radtke, a leader in the state tea party movement and former U.S. Senate candidate.

The first contested election in more than a decade forced the party to move the convention from a high school auditorium to a Hilton ballroom set up for more than 1,200 people.

The district chairman is an internal party post, responsible for rallying activists and volunteers at election time — and with the power to influence state party decisions such as whether to hold primaries or conventions to choose party nominees. A chairman is selected only by party activists for each of Virginia’s 11 congressional districts.

Cantor appeared with his family at the event, where Republicans had packed the house. He was there in part to address his own reelection prospects. He faces David Brat, a tea-party backed opponent, in a June 10 primary that will be open to all voters in the district.

Any sign that Cantor’s support has slipped among the region’s most active Republicans could spell a tougher challenge during next month’s election. And some of the crowd’s reaction Saturday when Cantor took a shot at Brat made clear that the Republican majority leader has not yet fully shored up support.