Home » »Unlabelled » How do you know Brat will be any better than Cantor?

How do you know Brat will be any better than Cantor? 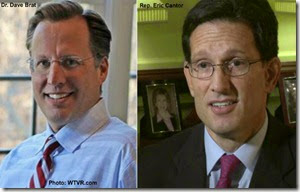 I have heard people in the Cantor camp ask, "Well, how do you know Dave Brat will be any better?" OK, that's a fair question, please allow me to answer.

The short and quick answer is, "I don't." Dave Brat, like Eric Cantor, may start out with good intentions and then, ultimately, be turned to the dark side. We just don't know. Brat does not have a voting record we can look to. His history is in the world of academia, so we have to turn there and see what it tells us. In the meantime I have to base my decision on other factors.

I have seen what Eric Cantor is doing and has done for many years now and I don't like it. I have seen Cantor's voting record and I don't like it. OK, that said, why would I choose Dave Brat? I have spoken to Dave Brat on several occasions, man to man, with no intermediary to "spin his words." I have shaken the man's hand and looked him in the eye. I was impressed with his bearing/demeanor and sincerity. I have asked him questions that he did not seek to avoid, but instead answered right away, without hesitation. I liked his answers. Do I agree with Dave Brat on every issue that we could address? No. But in the end I do believe that he has a firm grasp on the Constitution, the proper role of government, economic issues, and will work to reduce the size, scope, and spending of the federal government.

I have tried to talk with Cantor, both as a constituent, prior to my attempting to unseat him, and as an adversary, seeking to debate him. I never got anything but political song and dance. I have shaken hands with Cantor on a couple of occasions and a dead fish would provide a firmer grip. Maybe that is a minor point, but those sorts of things mean something to me. They tell me something about the man. He avoided eye contact on each occasion, seeking instead to "get away" from me as quickly as possible. A man who believes in himself and his record would not need to avoid speaking to his constituents.

It should also be noted that Dave Brat will not only seek term limits as our representative, but has self-imposed his own term limit. I heard him say it. Many of you heard him say it and we have it on record, so the chances of his being "turned" are minimized. I will also tell you, as I told Dave in one of our conversations, if he doesn't do what he promises to do, if he turns against us and his oath, I will work just as hard to get him out of there as I am working to get rid of Cantor. He responded by telling me that he would expect nothing less from me or any constituent.

So, for those reading this, who have asked me why, those are among my reasons for supporting Dave Brat.