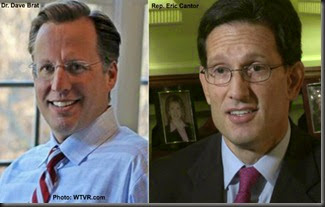 Eric Cantor does NOT represent the people of Virginia’s 7th District. He supports Crony Capitalists at our expense. He works for special interests NOT the people whom he pledges to serve.

Cantor regularly ignores the US Constitution and votes in contrary to it. For example, he has voted for big government bills and programs that over-reach Federal Constitution Authority and cost the tax payer billions by voting for things like Amtrak subsidies, PEPFAR, No Child Left Behind (with Bush and Ted Kennedy) and the list goes on and on. And he voted to fund OBAMACARE. He supports also supports Republican forms of Amnesty

Also he has continually voted against our Constitutional Rights and Liberties by voting for atrocities like the Patriot Act, the indefinite detention of Americans who are ONLY suspected of terrorism, supports the President being able to kill Americans suspected of terror when the travel outside of the country. Cantor support the President being able to willy nilly declare war every where he sees fit, when everyone knows ONLY Congress can declare war.

BUT THERE IS ANOTHER OPTION!  DAVE BRAT!!!

Dave Brat is a conservative Free Market Advocate, not a bought and sold Crony Capitalist. Dave Brat is against Presidential War on Demand. Brat is for restoring our Constitution Rights stolen in the name of fighting terrorism.

Go vote in your normal polling place. This is a vote in the process of selecting your 7th District Congressman, so any voter regardless of rather they are a Republican or not are allowed to vote by law. SO go vote in Dave Brat and vote out Eric Cantor.